SEAN SHERMAN, CO-OWNER of Sioux Chef, believes that indigenous recipes do more than honor heritage: they can also solve serious problems. It is estimated that 15% of the indigenous population has diabetes, nearly double that of the non-Hispanic white population. The Oglala Lakota tribesman hopes to change that.

“We’ve all been pushed into this colonial regime and so disassociated from where our food comes from,” Sherman says. “But if we actually eat nutritionally dense foods, we can eat less and feel better.”

For example, mix together a few readily available native staples and you can create a tasty, protein-rich dish like buffalo meatballs with a green vegetable salad (see recipe below) – one of the hits of the Sherman’s James Beard Award-winning cookbook.

Sherman got his first job in the kitchen at age 13. Since then, he has spent years researching how his ancestors ate, stored food and found ways to live off the land. In early 2020, he planned to showcase all that delicious potential in the heart of Minneapolis with the Indigenous Food Lab. (Imagine a nonprofit learning space to train more Indigenous cooks and entrepreneurs.)

First, the pandemic has delayed things. Then, in May 2020, protests over the murder of George Floyd rocked Minneapolis. While his town was struggling, Sherman used the food lab to address soaring homelessness among the impoverished native population. His team served more than 400 healthy Indigenous meals a day amid the pandemic. As of winter 2021, they had partnered with other Indigenous nonprofits to distribute nearly 80,000 meals to families and elders across Minnesota, supporting nine tribal communities. 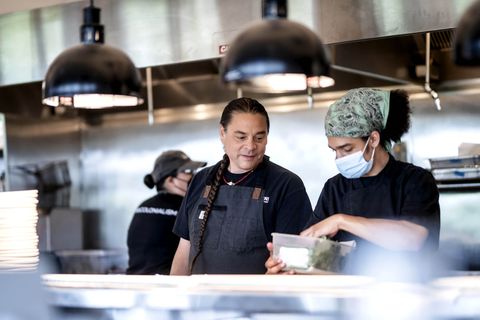 Sean Shermani is a chef and co-founder of a non-profit organization that trains cooks and entrepreneurs.

In July 2021, Sherman and his partner, Dana Thompson, opened a new restaurant, Owamni, which received a James Beard Award for Best New Restaurant the following year. Looking ahead, they are determined to open new food labs in strongly Indigenous locations adjoining ancestral lands, including Anchorage, Alaska; Rapid City, South Dakota; and Bozeman, Montana. “Not only will they have access to their Indigenous foods, but also education on how to continue Indigenous food systems in the future,” Sherman says. This is a recipe to repeat.

Recipe of The indigenous cuisine of the Sioux chef, by Sean Sherman with Beth Dooley

WHAT YOU WILL NEED

HOW TO DO IT

1. In a large bowl, hand mix the bison, corn, onion, garlic, black beans, salt, oregano, chives and sage. Using an ice cream scoop, form tightly packed meatballs and set aside.
2. Add 1 tablespoon of sunflower oil to a large cast iron skillet over medium heat. Add the meatballs and sear on all sides, 3 to 5 minutes on each side. Transfer the meatballs to a plate.
3. Carefully wipe the pan dry, add 1 teaspoon of sunflower oil and return to the heat. Grill the tortillas and set aside.
4. In a salad bowl, add the green vegetables, rhubarb and tomatoes. In a small bowl, mash the blackberries with the remaining sunflower oil. Add to salad bowl, toss and serve with meatballs and tortillas. Flow 4.

Shea Vassar is a citizen of the Cherokee Nation based in Lenape Land (Brooklyn). She holds a master’s degree in legal studies from the University of Oklahoma, where she focused on the law of Indigenous peoples.